On Why We Write Historical Fiction...and Why I Do

Way back when, from first to fifth grade, I attended St. David’s School in New York City. (In fact, St. David’s is the school featured in my little book Beastie.) The alumni magazine recently asked me to contribute a piece on the topic of writing historical fiction.
The result is here (pp. 36-39), but for the less digitally dexterous, the full text of the piece is offered below:

Most historical fiction isn't really about history. It's about the exact opposite, in fact.

This has always been my official explanation for why, despite having spent the last three decades writing stories set so squarely in the past, I've never really considered myself an honest scholar of it. For the record, these stories have included one novel about Napoleon's exile on St. Helena, another about the life John the Baptist, a few more set during the turn-of-the century -in South Africa, London, and Finland, respectively, and then again in my most recent book, The Unknown Woman of the Seine, which takes place during the last three days of the World's Fair in Paris, 1889.

And yet for all of the years of research that these efforts have entailed, all the library stacks and diaries and codices, correspondences and maps, all the trips and interviews and twisted, bottomless rabbit holes, I've never felt like much more than an amateur when it comes to history.

Why would this be?

Well because, as I say, there is a dirty little secret hiding behind the whole idea of historical fiction, and that is that -- at least from the perspective of the writer -- setting your sites upon remote times and places is less about discovering other worlds, more about disciplining yourself. It's kind of like traveling abroad in real life, or camping in the wilderness: the decision to deliberately install yourself in unfamiliar and maybe even inhospitable environments forces you to keep it simple. To rely upon essentials. And in the case of storytelling, those essentials have nothing to do with research or expertise. They have to do with what makes your characters tick --what they want, what they fear, what drives them to make the choices they do. These are what get you through the rough terrain. Not snuff boxes and wig powder.

To give an example: If you wanted to write a novel about Cain and Abel, say, set in the time of Cain and Abel, you would be wise to do some research on agrarian practices in the 4th millennium BC. And animal husbandry, for that matter. You'd pretty much have to. In the course of doing so, however, you would soon come to recognize just how vanishingly little you know, or can ever really know, about the lived experience of this time and place, and therefore just how vain it is -- in every sense of the word -- trying to capture that experience in contemporary and parochial language. No matter how descriptive you are, no matter how exhaustively you do your homework, each scene will be an exercise in smoke and mirrors. A deliberate deception. A narcissistic fantasy –

...Unless maybe you can find one of those driving forces I mentioned before, some common thread of human experience that connects us to them -- which in the case of Cain and Abel is clear enough:

Cain feels less loved by their father than Abel.

THAT is what the scene is about, and that is what you must make clear. Not the proper way of loading a shepherd's slingshot in the era before David...as interesting as that may be.

This, then, is the hidden value of choosing the far-flung subject. It sets you out upon the open sea -- or strands you in the desert, if you prefer -- and the only canteen it provides (or the only life raft) is the humanity of your character. Which is as it should be.

It is from that perspective that the apparent function of this thing we call "historical fiction" -- to transport the reader into the past, and to show them just how much the world has changed since then -- is revealed to be a pretext. The deeper and more meaningful objective is to render in the clearest relief imaginable the presence of those things that never change. Envy, for instance. The ever-thus.

This has always been my party line anyway -- the official, public explanation for why I keep playing this trick. And it's not untrue. However, there is another equally good answer, which I would normally only share with those in the know. But since the reader of this might actually be in that "know," I will make an exception.

The other answer is Mr. Bill Ryan.

It does seem to be the case that in the life of every remotely happy and/or well-adjusted person, one is bound to find one or two transformative teachers who manage somehow to align you to your core – by seeing what’s good in you and encouraging it; by infecting you with their passion for a given subject; and by simply being someone you want to do well for.

Mr. Ryan was my Fourth Grade homeroom teacher at Saint David's School back in 1973-74. I have written about him elsewhere, in fictional guise that I kept thin to make the point that he was not obviously cast in the role of beacon. Fig-shaped, bounded in the middle by thin black belt, black shod, horn-rimmed, Elvis-haired but hardly Elvis-featured. The eyes were a little squinty, the nose a little pointy, the chin most definitely doubled. But none of that mattered because, to me, he glowed -- imbued as he was by a vast intelligence and curiosity, humor, kindness, patience, principle, and an evident love of things that should be loved. Baseball, for instance. And history, of course. But most of all...story.

Boy, did Mr. Ryan love a good story, and man-o-man, could he tell one.

I can see him in class, striding the aisles between our desks, reading aloud to us from a book of his choosing -- The Hobbit, Robin Hood -- but he could expound extemporaneously and with equal flair about Ancient Greece, gods and goddesses. Sophocles. Odysseys. Arthurian legend. Gregorian chants. Thomas More. The Mighty Casey.

I don't recall if any of this was actual curriculum, or if this was just him treating us to the things he most enjoyed. (He enjoyed saying the name 'Uther Pendragon'.) I do remember, though, that for any assignment of sufficient heft, he would as he was handing back our graded papers, declare the authors of the most distinguished efforts -- the 'A's, I'm guessing -- to be members of the 'Commendabi League' (pronounced KAHM-en-DAH-bee), holding up that paper like a torch before setting it down on your desk. To be as consistent a member of the Commendabi League as one was able -- maybe a resident even -- was clearly the goal.

As inspiring a presence as Mr. Ryan was in the classroom, his most natural setting was the school chapel. On the days he was tapped to speak, there was always a special energy in the room. The sight of him seated up in the front row, consulting an index card, would start a murmur among the boys. That murmur would soon become a buzz and leave the room as word went out. "It's Mr. Ryan." The message traveled all throughout the building, and the heavy door would remain open a little longer on such days, for anyone whose calendars were clear, other teachers and administrators who wanted to come and listen.

The excitement was deserved. Mr. Ryan was as gifted a public speaker as I have ever heard -- or seen -- striding comfortably in front of the lectern. Left hand in pocket, rubbing his chin with the other, leaning back, sweeping with his arm as he spoke. Painted really. Stories from memory. Poems. Anecdotes passed down, with maybe a little O'Henry sprinkled over top. All parables, though, and not so many that a few favorites didn't emerge over the Lower School years. "The family jewels." Recollections of war. Mr. Ryan had served in Korea. There was one story of a troopship, I think, downed at sea, and of sailors clinging to jetsam in the eerily quiet Pacific as the blanket of night fell all around.

I can still hear the silence in the room, borne of Mr. Ryan's pauses, and sustained by his reflection, accented here and there by the splintering groan of chapel pews. He was a captivating man, and there can be no question that while I sat in those creaky benches, in those suspended breathless moments, a path appeared before me -- not one that I'd have presumed to recognize at the time, being a bit shy, but that I would eventually take up in my way, in my own language, and for reasons likewise of my own.

Upstart start-up booksite Shepherd.com asked me to recommend five books on the basis of my choosing. So I did. Give them a looksee and browse about. 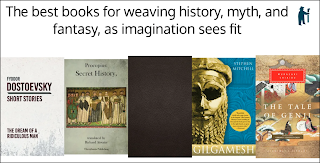