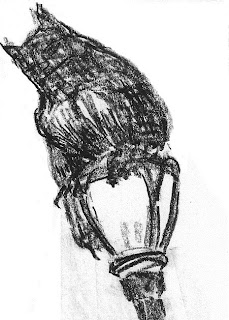 If I'm not mistaken, yesterday marked the release of CENTRAL PARK: an anthology. Edited by Andrew Blauner, the collection contains pieces by Colson Whitehead, Paul Auster, Francine Prose, Jonathan Safran Foer, and a bunch of other fine writers. There's one by me as well, entitled "Beastie," excerpted from a much longer story by the same name that I wrote a few years back. In recognition, I include here a poem that, though it does not appear in the published excerpt, inspired the story as a whole. (If you'd like to see some illustrations from the same story, hop on over to the drawings blog.)

With perfect poise the bronze await,
while passers gaze, and painters paint,
while sticky-fingered babies
muck their ears and noses.
All throughout the park they stay
as nannies read and children play.
With dignity and no complaint
the statues hold their poses.

Even when the sun descends
and all the paths begin to clear,
when lamps alight to welcome night,
no pigeon is so impolite
as to suppose that anyone is here.
Not while the Beastie sleeps.

It’s only when the moon eludes the cloud-bank,
and every peering bedroom light goes dim,
when darkness looms in quiet rooms,
and closets stand like mummy’s tombs,
and the last child’s dream is finally entered in,
that’s when the shadow slips out from its dungeon,
and tumbles down to fetch itself a drink,
to forage in the trees for midnight luncheon,
and just like that make chiseled eyelids blink,

and fingers twitch, and noses itch
and round bronze shoulders sink.
From meer to lake, they’ll all awake
from bridle path,
to reservoir,
to rink…

…shall Alice and her friends
descend the toadstool,
the duck look down
and Andersen stand up,
shall statesmen turn
their sculpted heads,
crack free their heels,
tramp flower beds,
while noted busts from
pedestals un-cup.

So the siblings in the garden quit the fountain,
set down their bowls to drink the evening air.
The seraphim stretch out their wings,
and statesmen state some stately things.
The pilgrim prays.
The muses wash their hair.

The animal band that twirls around the zoo clock
will all break free and flee the entry arch.
Some head down to the merry-go-round
to watch the soldiers march,
while Alice lounges on the lawns,
eating apples made of bronze,
and cherubs cross the bridge in each direction,
while horses graze, and lizards laze,
while kings attack the meadow haze,
and ugly ducklings pity their reflection.
And they converse and they digress.
They plot, they scheme, and they confess,
though to what we can but guess…
…as the only one who ever really hears them
is the only one who ever lets them hear:
his moon-ward howl, his stomach growl,
his gnaw, his paw, his grunt, his scratch, his cheer.
All hail the Beastie,
shaggy Beastie,
Lord of the Lamp Post!

So for the while the poets float on rowboats.
The door-mouse roars, and governors patrol.
The busts burst out in evening song.
The Indian hunter joins along.
The falcon flies. The husky digs a hole.

But just as every day
will soon enough give way to night,
so must darkness yield to light;
they all can see it creep up from the east.
The bronze cock crows,
the whole park knows it’s time –
for hero, deity, and beast.

They choose the quickest paths back to their places.
They reckon thoughts to conjure faces.
The pilgrim flares his boots and stands his gun.
Jaggiello climbs up to his mount.
The angel crowns the water fount.
Each one of them to right where it begun:

Alice to her toadstool; the kitten to her lap;
Hans Christian sets his storybook on knee.
He opens to the page again,
the one that locks his cage again.
The duckling lifts his bill so he can see.
By then the Beastie’s safe inside,
upon a slab that’s three feet wide,
exhausted from his night and turning in.
The lamp posts snuff, that was enough.
The sun’s returned. Its first rays scissor in.

And when they touch Tecumseh’s cheek,
that’s when the last should steal its peek,
as after that they stiffen and they stay.
Their light recedes to other needs
To summon anyone who reads,
or strolls,
or paints,
…or anyone who’ll play.
–          Anonymous
Congratulations, Andrew!

(And here are some places to purchase: Amazon. B&N. IndieBound.)